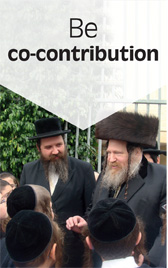 Kadish and
Mishnayos Sponsor
of the day Place
a qvitl